‘Tis the Season for Spectacular Wins with Santa’s Great Gifts in the Tournament of the Month! 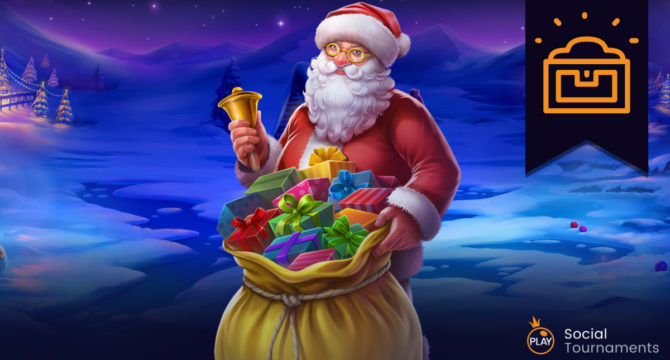 Filled with enchantment and Christmas cheer, this will be the last one for the year

With Santa and his reindeers flying high, we hope your wins light up the sky.

Pragmatic Play’s Santa’s Great Gifts slot is where the magic will happen,

So, get your tickets and let’s start unwrapping,

The magical Prize Pool that players have in store,

Which could be yours if you read on a bit more!

Santa’s Great Gifts Slot – Tournament of the Month in December!

The game is set in the wonderful and cold North Pole, where Santa and his elves are hard at work getting all the gifts ready to make it in time for their drop-off on Christmas Eve. There’s a hint of happiness in the air, as the elves sing their magical song, spreading good fortune and cheer. Snowmen with their carrot noses keep the reindeer company, with Rudolph getting the troops ready for a speedy trip around the globe, as Santa oversees the magic unfolding in this Christmas-themed slot.

Santa’s Great Gifts takes place on a 6×5 grid reel, where 20 paylines and Christmas-themed symbols get you the best of wins in the base game or in one of the bonus rounds this slot brings! The Tumble Feature is present in both the base and bonus rounds – offering players the chance to bag more than one win off an already winning spin. Land 4 or more Scatter symbols on the reels and you’ll trigger the Free Spins round with up to a whopping 20 Free Spins! You’re also treated to gifts wrapped in Green, Red, Purple, and Blue which can land at random during spins and Tumbles in the base and Free Spins games – which adds a multiplier between 2x and 100x to the reels for spectacular wins!

Each month we host a special Tournament starting roughly at the midway point, and it runs for a full month! The Tournament of the Month can be joined by either purchasing a ticket using your coins at our online store – or you could win one in one of the many Qualifying Tournaments we have on offer. The game is decided by players a week before the new tournament starts, via a voting poll on our Social Tournaments Discord Channel, making this our most player-involved tournament we have on offer!

The Tournament of the Month has a Prize Pool of a massive €9000, that will be shared amongst the top-ranking players on the leaderboard at the end of the tournament. Additional prizes also include Lootboxes and Coins, with the top 5 spots on the leaderboard being guaranteed a win of up to €300 in cash! Players 6 to 550 will take home up to €125, and players in positions 1 to 1000 also get the chance to take home Lootboxes with the best in Social Tournaments’ gifts!

Join in on the Christmas fun with Santa’s Great Gifts slot, with epic prizes up for grabs in the latest Tournament of the Month – and the last one starting in 2022! Let’s end the year with a blast, and with the help of Santa and his helpful elves, you might just reach that top spot to unwrap juicy gifts in the latest Tournament of the Month on the Santa’s Great Gifts slot by Pragmatic Play!