A Recap of the Biggest Wins on Pragmatic Play slots in 2022! 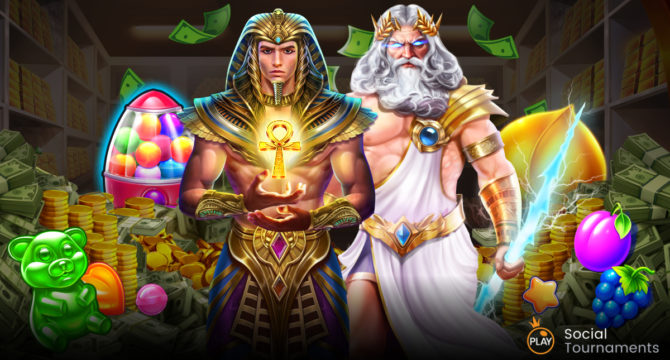 Each week we review some of the biggest wins players have on top Pragmatic Play slots, with a full blow-by-blow on how the sensational win took place! Throughout the year we’ve reported on these winnings and now it’s time to show our players which games have come out as the online slot that gave players the most satisfaction with big wins, and epic gameplay!

The sweetest wins have come from the Sugar Rush Demo slot this year which has proven to be one of the most popular Pragmatic Play slots! Having been launched only this year, this game has quickly won players’ hearts with its 7×7 grid full of possibilities and up to 150x possible payline win. However, what sealed the deal wasn’t the Scatters that can trigger the Free Spins nor the Tumbles, but the amazing mechanics behind the game, which works wonders with the Multiplier Spots Features, offering players a true chance to win the 5000x max win!

This being said, 2022 brought spectacular wins to many players, and, thanks to the Pragmatic Replay feature, we can proudly say we have them ‘on tape’ (figuratively speaking)! One lucky Romanian player managed to score a 3625.1x big win on the Sugar Rush slot in 43 Free Spins, with an 8 RON bet, retriggering the bonus three times. A Turkish player got lucky enough to bag a 2637x win on the Sugar Rush slot as well, during the 30 awarded Free Spins!

The mighty Egyptian god Ra was known as the King of the gods according to Egyptian mythology – and to Pragmatic Play new slots players he comes to bring exceptional gameplay and top-tier wins!

The Might of Ra slot joined Pragmatic Play’s slots portfolio at the beginning of 2022 and hasn’t stopped offering players top wins ever since! One player from Germany got hot-close to the 22.500x max win with a 22.497,9x multiplier, scoring one of the first Pragmatic Play Big Win on Might of Ra recorded on our website.

Luck was on the side of a Turkish-speaking player who managed to bag a win of 22.500x the bet, thus hitting the Max win in the Might of Ra slot from Pragmatic Play! Congratulations, master, this truly is something to remember 2022 by!

From the King of the Egyptian gods to the Greek King of the gods, Pragmatic Play’s slots grant only the best wins to their players, and the Gates of Olympus Demo slot is no different!

If the previous two online slots have swept players off their feet in less than one year, Gates of Olympus has been ruling their hearts since 2021! Present with two amazing wins, this online slot gives players a glimpse of the Gods’ world with its 5000x max win, tumble mechanism, and Free Spins option!

The first big win we have on Social Tournaments on this slot came this summer, with a player hitting a 3300x win on the Gates of Olympus slot from Pragmatic Play. This user bagged this base game win by having the Ante Bet option activated, all off of an $8,75 bet!

The second big win comes from Zeus’ homeland – Greece! A lucky Greek player placed a shy rather €2 bet but managed to land a 500x multiplier on the Gates of Olympus slot, with the total win adding up to €10,000!

Last but not least, the Fruit Party slot offered players some of the fruitiest wins in a tumble-filled gameplay where fruit symbols are on top! The first juicy win came in in October from a German player that wowed us with a 5000x max win on the Fruit Party slot! To make things even more astonishing, this huge win happened in the base game – talking about fruity wanders!

Next up, we have the almost-max win of 4920.4x in the Fruit Party slot, where a Turkish player was so close to hitting the winning of their lifetime! No worries, good wins come to those who wait (and spin, of course, there’s no winning without spinning).

We were able to share all these amazing wins with you thanks to the replay feature built into some of Pragmatic Play’s games! Pragmatic Replay allows you to generate replays of your top 100 wins and even share them on your favourite social media platforms!

We’d like to congratulate everybody who played and had fun with Pragmatic Play slots in 2022! Besides the blasting wins these top online slots can offer, they also provide some of the most captivating gaming experiences in the industry! Cheers – may there be many, even bigger wins in 2023!